Apropos nothing in particular, here’s one of my favorite poems by the Swedish author Lars Gustafsson.  Please note that this translation is from memory (and a long ago one – haven’t been able to find the Swedish original)

“At the cottage in the woods,
we have an outhouse.
From the rafters hangs a wasps’ nest,
the size of a football.
On summer afternoons, I sit there,
quietly smoking my pipe, reading the newspaper.
Wasps buzzing around my head.
You get used to it, eventually.“

Update, July 2017:  OK, finally found the poem.  It’s called “Ett slags epigram” (“A kind of epigram” ) and is from the collection “Varma Rum och Kalla” (“Warm Rooms and Cold”) from 1972.  This, if nothing else, shows how unreliable [my] memory can be – and how much better a poet Lars Gustafsson was, than I could be.  (again, my translation; while it has been “professionally” translated I haven’t found that book):

A kind of epigram

“Here is, for instance, a rural outhouse
to which noone any longer dares go, three, four

wasps’ nests hang from the ceiling, deafly vibrating with life.

I alone sit there, calm and cool
with my book, my pipe, my papers

What did you think?

On the other hand; the motto from his novel-cycle “Sprickorna i Muren” (“The Cracks in the Wall”) still stands and applies:

As “Sam” of Mort Walker’s comic “Sam’s Strip” said in the last one Walker did:

“I hope, that when I’ve gone, people will say:

Good Old Sam, when will we ever see him again?

In the aftermath of the first World War and at the beginning of the Irish uprising, Yeats wrote (in “The Second Coming”):

“Turning and turning in the widening gyre
The falcon cannot hear the falconer;
Things fall apart; the centre cannot hold;”

I try to manage by them.

Which roughly translates to:

“The years pass and the vanes swing.
The earth dies where the gods tread.
Here, where the struggle usually is between want and ought to.
Gray hairs is all I get,
and time really heals no wounds,
but it makes me forget how painful it was”

OK, one more Lars Gustafsson quote.  This time from “Kärleksförklaring till en Sefardisk Dam” (“Declaration of Love to a Sefardic Lady”) from 1970.   just a very small snippet:

Time, wind and broad daylight, crack-formation, thaw,
it is time say the agitated birds across there
moving over the ice like a flock of irresolute punctuation marks
that won’t stop for long on any paper

it is time, it is always time say the burbot eyes,
there is still time says the clock, little time
say the agricultural specialists, it is time
say someone and rises in a glade in the forest, 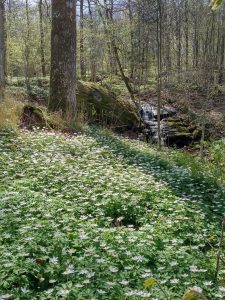 “I’m all done with hating you. It’s all washed out of me. I hate people hard, but I don’t hate them very long.”
(Marlowe to Det. Degarmo)
― Raymond Chandler, “The Lady in the Lake”