I grew up in Göteborg (Gothenburg), Sweden, the son and grandson of nurserymen.  On my dad’s side, my brother is fifth generation nurseryman and on my mother’s side third generation.

The family nursery “Kvibergs Handelsträdgård” was founded by my  grandfather in 1926.  In 1943 it moved to the location it had until it was torn down in 2015.  How that came about is, in and of itself, a story of municipal and governmental corruption, that I might rant about at some other time.

This is what the nursery looked like in the late 1960ies, as seen by the Gothenburg painter Gunnar Dahlstrand 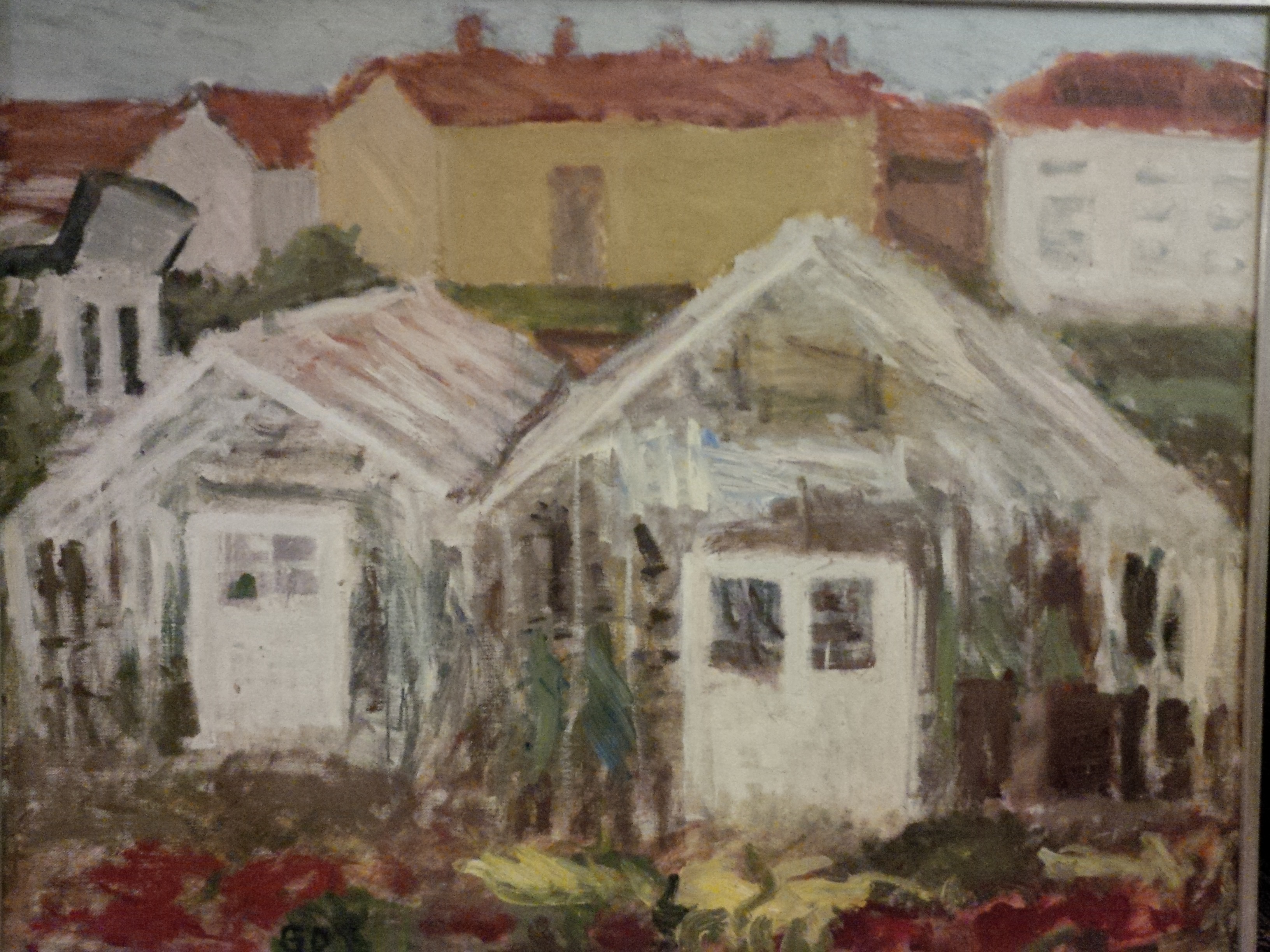 This is how it appeared to the Gothenburg artist Anders Claussén 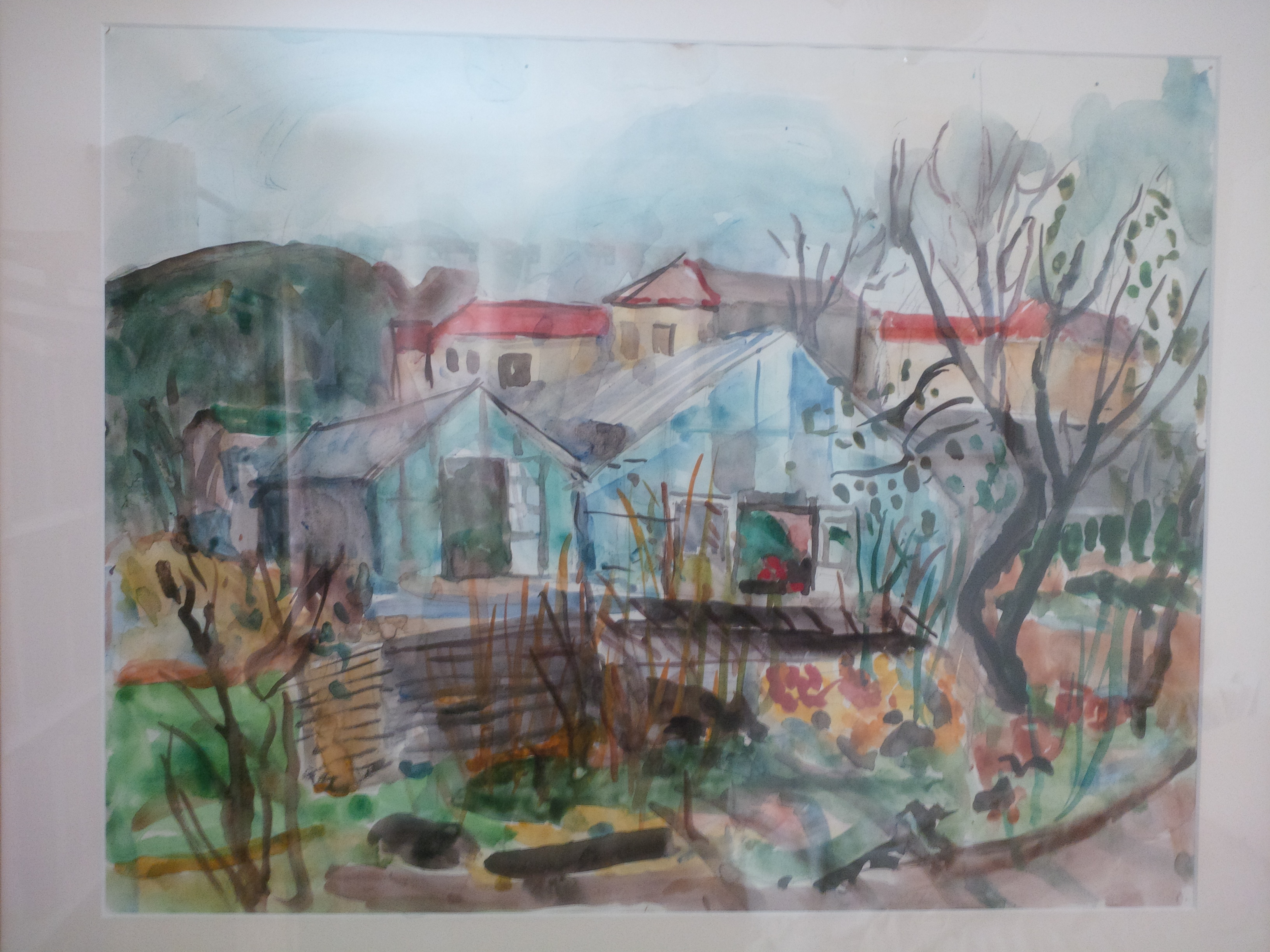 Note the “hot frames” this side of the greenhouses.  The way you “laid” those is that you spread about a foot – or two – of fresh horse manure, over an area about 10ft by (N x) 6ft, cover that by a layer of straw (or old leafs) and then put a wooden frame (two one-by-eights on top of each other) with two-by-twos every 6 feet or so across the top.  Then you fill that frame with soil.  You then make (~8x6ft) frames covered with glass that go between the 2x2s to cover the whole thing.  As the manure rots it gives of quite significant amounts of heat and so you can sow seeds well before the last frost (or speed up or overwinter tender plants etc.) without taking up costly greenhouse space.  I remember my dad and granddad worrying (or tasking us) to “set” or “undo” the air, in the mornings and before we’d go home.  This meant putting a wooden wedge under the lower side of the glass frame in the morning so that you’d get air circulation, and taking it out at night to keep the heat in over night.

Below is a family gallery as seen by  Gunnar Dahlstrand.  Gunnar was a late “member” (or maybe disciple) of the “school” known as the Gothenburg Colorists.  In “portrait” painting (as in most of his work) it was shapes, colors and light that was the focus, but he was highly skilled at capturing the essence of a person.

For instance, if you look below at the winter picture of my dad and my uncle Valter Nordin, digging up Hyacinths that are going in to the greenhouse to be forced, anyone who knew my uncle will immediately recognize him, even from this non-too-detailed painting.   Same goes for the one of my grandfather inserting a steel wire into a pine cone and the one of my brother picking daffodils.

My [maternal] grandfather – who founded the nursery

My maternal grandmother weeding in the hot-frames

My first school was “Utbynässkolan” where I, for grade 1-3 had Ulla Tornblad as my teacher, and for grades 4-6 Inga-Lill Olsson.

For secondary school I attended Munkebäcksgymnasiet.

…This is still a stub, which needs to be expanded…